We have just started a new Maccabi club: CATCHBALL!! We are participating in the Mamanet League.

We have classes on Mondays, Tuesdays and Thursdays so far, but we’re expanding soon. The classes are in the evening at 20:30 in Buitenveldert. You do not have to have affiliated with the JBO to join!

What began as a low-key game to help parents pass the time during their kids’ after-school activities turned into an international phenomenon that has been recognized in the United Nations.

Each week, when Ofra Abramovich took her daughter to ballet class, she would find herself turning down an invitation from a fellow mother to join a weekly game of “catchball,” a volleyball-like game that residents of her hometown of Kfar Saba had started to play at a local gym.

“I always said I was busy,” recalls Abramovich, who was then 40 years old with two children aged five and seven. “But she kept insisting, and finally I went, mainly so she would leave me alone and stop asking me about it.”

That was 11 years ago, and it was one of the best decisions Abramovich ever made.

“I felt playing that game that I had returned to the age of 16,” Abramovich says. “The game was very easy to learn, you didn’t have to be in shape, and the teamwork is so fun. I thought then that all mothers should play this.”

And, today, many do.

Mamanet is the only sports league for mothers.Mamanet allows mothers to revive their younger days as athletes, or experience being part of a sports league for the first time. In mamanet mothers of students in participating schools represent their children school with sportsmanship and pride  The league is based on children’s elementary, junior high and high schools,. Mothers bring back to school the championship cup to the school. 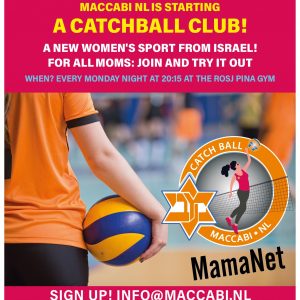